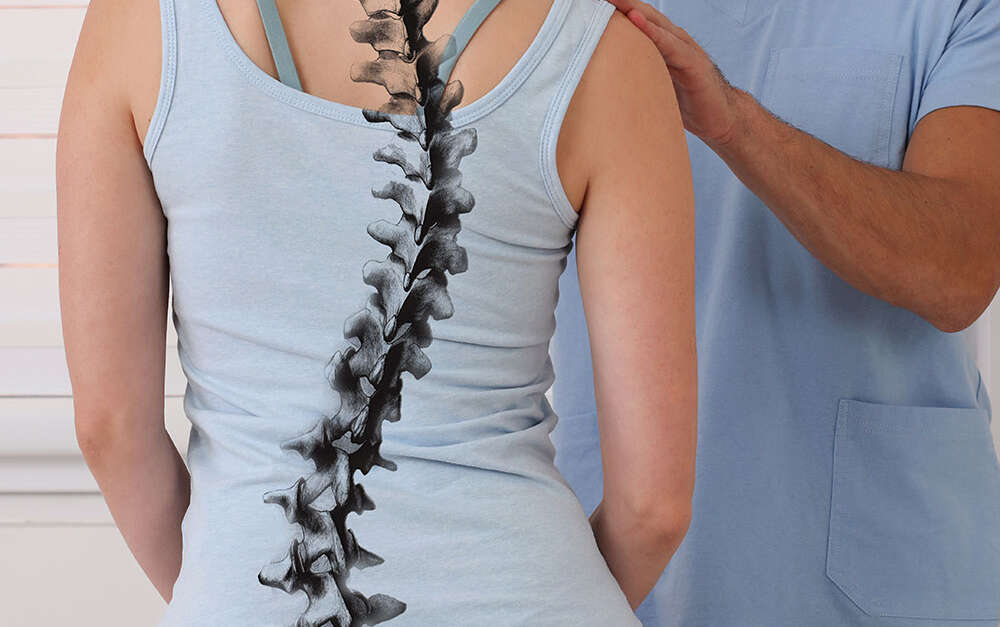 Our scoliosis brace is custom molded to patient model from a casting of the patient’s torso.

This fact sheet defines scoliosis and provides information about how it is diagnosed and treated in children and adolescents. You may be interested in contacting one or more of the organizations referenced at the end of the fact sheet for more information.

Scoliosis is a sideways curvature of the spine, or backbone. The bones that make up the spine are called vertebrae. Some people who have scoliosis require treatment. Other people, who have milder curves, may only need to visit their doctor for periodic observation. The section “Does Scoliosis Have To Be Treated?” describes how doctors decide whether or not to treat scoliosis.

People of all ages can have scoliosis, but this fact sheet focuses on children and adolescents. Of every 1,000 children, 3 to 5 develop spinal curves that are considered large enough to need treatment. Adolescent idiopathic scoliosis (scoliosis of unknown cause) is the most common type and occurs after the age of 10. Girls are more likely than boys to have this type of scoliosis.

Since scoliosis can run in families, a child who has a parent, brother, or sister with idiopathic scoliosis should be checked regularly for scoliosis by the family physician.

In 80 to 85 percent of people, the cause of scoliosis is unknown; this is called idiopathic scoliosis. Before concluding that a person has idiopathic scoliosis, the doctor looks for other possible causes, such as injury or infection. Causes of curves are classified as either non structural or structural.

How Does the Doctor Diagnose Scoliosis?

The doctor takes the following steps to evaluate a patient for scoliosis:

Doctors group curves of the spine by their location, shape, pattern, and cause. They use this information to decide how best to treat the scoliosis.

What Are the Treatments For Scoliosis?

The doctor will suggest the best treatment for each patient based on the patient’s age, how much more he or she is likely to grow, the degree and pattern of the curve, and the type of scoliosis. The doctor may recommend observation, bracing, or surgery.

Are There Other Ways To Treat Scoliosis?

Some people have tried other ways to treat scoliosis, including manipulation by a chiropractor, electrical stimulation, dietary supplements, and corrective exercises. So far, these treatments have not been scientifically proven to be effective.

Can People with Scoliosis Exercise?

Exercise does not make scoliosis worse. In fact, it is very important for all people, including those with scoliosis, to exercise and remain physically fit. Girls have a higher risk than boys of developing osteoporosis (a disorder that results in weak bones that can break easily) later in life. The risk of osteoporosis is reduced in women who exercise regularly all their lives; and weight-bearing exercise, such as walking, running, soccer, and gymnastics, increases bone density and helps prevent osteoporosis. For both boys and girls, exercising and participating in sports also improves their general sense of well being.

Why Do You Have to Treat Scoliosis If It is hardly Noticeable And I don’t Have Any Pain?

It is treated to prevent your curve from getting worse. Without treatment, your curve could become so severe that you might have obvious physical deformity, back pain, and in certain cases, heart and lung problems.

What Are Researchers Trying To Find Out About Scoliosis?

Researchers are looking for the cause of idiopathic scoliosis. They have studied genetics, growth, structural and biochemical alterations in the discs and muscles, and central nervous system changes. The changes in the discs and muscles seem to be a result of scoliosis and not the cause. Scientists are still hopeful that studying changes in the central nervous system in people with idiopathic scoliosis may reveal a cause of this disorder.

Where Can People Get More Information About Scoliosis?

This is a nonprofit voluntary organization that provides pamphlets, a newsletter, and other information materials on childhood and adult scoliosis. The foundation also provides support group information and lists of physicians in each State who specialize in scoliosis.

This association publishes a quarterly newsletter and pamphlets. A single copy of their fact sheet is available free with a self-addressed, stamped envelope. The association also provides information about local chapters and support groups.

The society is a professional organization for orthopaedic surgeons interested in scoliosis. It provides pamphlets about the diagnosis and treatment of scoliosis. Price information for ordering pamphlets is available from the society. The society also can provide referrals to physicians.

To obtain a copy of the American Physical Therapy Association’s brochure about scoliosis, please send a self-addressed, stamped envelope to the above address.